Mayhem On The Roads Today 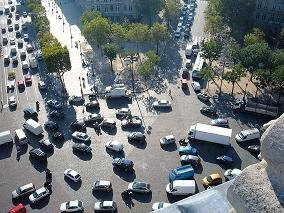 As you may know, there's a tube-strike today. Rather than use it as an opportunity to "work from home", Londoners seems to have decided to battle in anyway possible, with the streets already rammed at 7:15. Here's your I-Spy cut-out-and-keep guide to the strike
It'll be an interesting couple of days.
Posted by matt at 12:27 AM

Oh, I am so glad I work outside London!